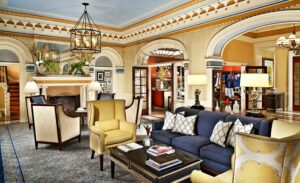 activities in the area. The hotel is a wonderful and warm European style boutique hotel steeped in history, but perfectly suited to these modern times. Opened in 1913, the hotel has gone through numerous iterations over the years. At one point the pharmacist at the drugstore next to the hotel was the father of actor Gregory Peck who grew up in La Jolla before heading to Hollywood for fame and fortune.  In the 40’s the Colonial was a temporary home to some of Hollywood’s up and coming stars who were performing at the La Jolla Playhouse, founded by Peck. Charlton Heston, Dorothy McGuire, Groucho Marx, Jane Wyatt, Eve Arden, Pat O’Brien, David Niven and many other celebrities occupied the hotel well into the late 1950s.

It’s been a common rumor for years in La Jolla that the hotel is haunted…like when the phone rings at the front desk and it’s from a room that is unoccupied. See more stories.

THE ROOMS at the Grand Colonial La Jolla

There are 92 Guest Rooms and Suites, 52 Ocean or Village views and 45 Junior and 1 and 2 Bedroom Suites (some with kitchens and fireplaces). Rooms are decorated with cheerful colors of yellows and blues and whites perfectly suited to a waterside location.  My corner room was delightfully oversized and had views of the ocean from windows that opened to let in the sea 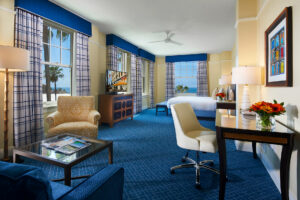 Nine-Ten is the signature restaurant and is the recipient of the 2021 Michelin California Guide “Plate Distinction.” The cozy and intimate restaurant with seating both inside and out is led by 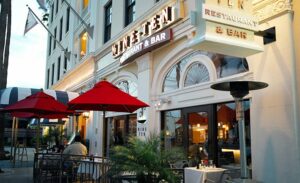 award-winning chef Jason Knibb and where guests can enjoy the best from local artisan farmers and local fish selections and items arriving daily from Hawaii and the North Pacific and Atlantic regions.

WHAT OTHERS SAY About the Grand Colonial La Jolla 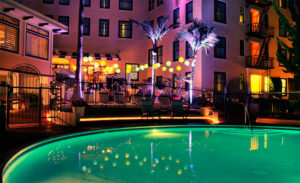 There is a heated pool on site and the hotel offers complimentary bike rentals and In-Room Massage, Spa & Wellness Services. See our “Things to Do” section for the wealth of local activities.

Nearby Things To Do
Destination Type: City