OVERVIEW of the Jefferson Hotel 50’s. It closed in 2007 for a two year renovation that resulted in the stunning property it is today. The hotel is a Forbes Four Star recipient and is currently ranked the #1 hotel in Washington by Trip Advisor. Influences from the hotel’s namesake, Thomas Jefferson, are everywhere from the original signed documents in the lobby to drapery patterns Jefferson brought back to Monticello from Paris to parquet flooring in the lounge recreated from Monticello’s main salon to the Book Room inspired by Jefferson’s own Book Room at Monticello and more.

THE ROOMS at  the Jefferson Hotel

DINING at the Jefferson Hotel

Quill is a dark and intimate cocktail lounge with excellent drink and bar food menu. Tuesday through Saturday, legendary Peter Robinson entertains at the piano. Hotel guests can also enjoy their drinks in the cozy Bookroom beside a roaring fire.

The signature restaurant, Plume, is the only Forbes Five Star restaurant in Washington and 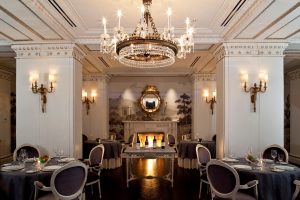 receives the highest Zagat ratings for service and décor. Executive chef Ralf Schlegel is a classically-trained chef in French cuisine and hails from Germany and a long line of German hoteliers and restaurateurs.

The exquisite wine list boasts some 1,300 labels and spans more than a dozen nationalities and dates back to a rare 1720 Borges Madeira. The list highlights wine selections called, “Hidden Gems,” wines of rare quality and distinction.

THE RATES at the Jefferson Hotel

WHAT OTHERS SAY About the Jefferson Hotel

“Quiet and reserved”, this “elegant” historic hotel in a “beautiful” beaux arts building earns praise for its “superior” location, “wonderful rooms” and suites (all with soaking tubs, some with 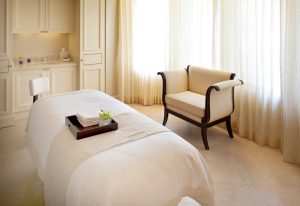 views down 16th Street to the White House), a “romantic” restaurant and a “beyond-professional” staff; according to a few critics, the overall effect is perhaps “a bit stodgy”, but smitten admirers insist that for an “intimate” “getaway” worthy of a “second honeymoon”, it’s “delightful.” ZAGAT

PROMOTIONS at the Jefferson Hotel