OVERVIEW of The Ivy Hotel Baltimore as a weekend destination has much to offer; the Inner Harbor area with its dining and shopping attractions , Camden Yards and the Baltimore Orioles, the football Ravens, historical venues and a vibrant cultural scene.  But until recently, it has lacked world class accommodations that add an extra element of enjoyment to a weekend away.

The lodging scene began to change with the addition of a Four Seasons hotel at the end of 2011 and has just exploded with the June 2015 opening of the luxury boutique hotel, The Ivy.

The Ivy is an amazing collaboration of owners, architects, interior designers and hotel consultants that virtually assures The Ivy a place beside America’s greatest hotels. The owners, financier and philanthropist, Eddie Brown and historic building experts Martin and Tony Azola provided the capital and vision for a project designed by noted architects Zigler/Snead. Interior designer Joszi Meskan has created a one-of-a kind look for the public rooms and guestrooms and The Garrett Hotel Consultants (GHC) contributed years of experience in re-launching and re-conceptualizing existing hotels and historic properties. GHC has owned or advised some of the best accommodations in the country including The Point, the Lake Placid Lodge, Twin Farms and more. CEO David Garrett was also the President of Relais & Chateaux North America, the most prestigious hotel group in the world.

Built in the 1800’s as a private mansion, The Ivy has retained the stunning architectural characteristics of the original design and seamlessly blended it with a new addition that expanded the footprint. Over 200 local artisans contributed to various elements of construction and design. The main floor has high-ceilinged rooms with original hand-carved paneling, beautiful hand painted wall murals, leaded windows, elegant fireplaces and inlaid floors and serves as breakfast room, music room, game room and library. Designer Meskan has made wonderful use of antiques and artifacts purchased from historic (but closed) Inn at National Hall in Connecticut. This floor opens to a terrace that surrounds the walled courtyard.

THE ROOMS at The Ivy Hotel The 18 guestrooms are individually decorated each with its own character and feature a canopy bed draped in luxury linens, a fireplace, a hand painted armoire (local artists were commissioned to each paint one of the 18), a flat screen TV, heated towel racks and luxury toiletries. Some also have balconies or easy access to the Ivy Spa.

DINING at The Ivy Hotel

As if this were not all enough, the property features a luxurious spa and what will become one of Baltimore’s premier restaurants, Magdalena. Helmed by Executive Chef Mark Levy, formally of The Point, a 5 star property in Upper Saranac Lake, NY, the restaurant includes a full dining room and bar, a tasting room and a wine cellar. We enjoyed a magnificent meal of chilled fennel gazpacho, a salad of Oregon salt baked vegetables, seared Ocean City sea scallops, a tasting of 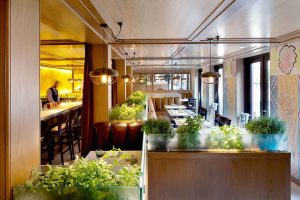 THE SERVICE at The Ivy Hotel

In our experience, the best properties in the country are those in which the owners are intimately involved in the operation, maybe not day to day, but their presence is felt. The Ivy is a labor of love for all involved and that bodes well for the traveler. The staff is expertly trained and they make your visit a pleasure.

THE RATES at The Ivy Hotel

WHAT OTHERS SAY About The Ivy Hotel

PROMOTIONS at The Ivy Hotel

Baltimore is delightful at any time of year.

Baltimore has everything a major city can offer; history, museums, art, music, professional sports and more.

BOOK IT! on Hotels.com