OVERVIEW of Inn at Dos Brisas 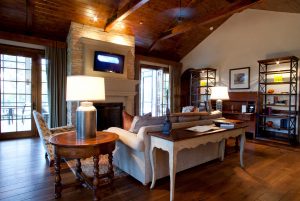 Every serious traveler, foodie and oenophile has dreamed of owning their own place, but few of us, have the resources or the experience to pull it off. Annapolis, Maryland and Houston businessman Doug Bosch and his wife Jennifer had both the resources and the passion to covert their 300 acre family abode into the Inn at Dos Brisas, a world class inn and restaurant in the Texas foothills between Houston and Austin.

Inspired by travels throughout Europe, memorable meals at places like The French Laundry, the Inn at Little Washington, Daniel and Chez Panisse and stays at world class properties like The Point, Bosch set out to create his own version of luxury and based on a recent Mobil Five Star award for the restaurant, he has succeeded.

No expense was spared in creating a hideaway guaranteed to relax even the most ardent Type A personality. Chefs from throughout Europe and the United States were interviewed, lighting, linens and coffeemakers were imported, a wine cellar master was hired to build the cellar and wine list, a magnificent 1760’s fireplace mantel was shipped from the Loire Valley and organic gardens were planted.

THE ROOMS at Inn at Dos Brisas

The spacious Spanish casita styled rooms (@800sq ft)  have vaulted ceilings with dark beams, leather furniture, iron head and foot boards, cement floors (to keep things cool) were painted a faux leather and covered with colorful area rugs and a charming patio looked out over the 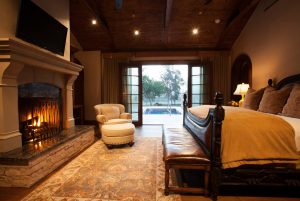 rolling meadows. Fresh flowers, local artwork and colorful striped duvets and shams offset the white walls. A comfortable window seat made for a great place to curl up with a book early in the morning and watch the sun rise over the dewy fields. Amenities include luxury linens, feather beds, a white stone fireplace, stocked mini kitchen, HDTV, DVD player and VCR. The large marble bath featured plush towels and robes and Lady Primrose amenities.

2011 saw the addition of the 1795 sq ft Haciendas which include a screened in porch and a private pool.

DINING at Inn at Dos Brisas

The Inn is the only Forbes Five Star restaurant in all of Texas and one of only 62 in the country. It is no wonder, though, with a culinary team unmatched in Texas or just about anywhere. Executive Chef Zachery Ladwig made his bones at Michelin starred Gordon Ramsay at the London and Bouley, at Corton, a two Michelin starred establishment. He played a significant role at The Garden of the Gods Club (Colorado Springs, CO); The Williamsburg Inn (Williamsburg, VA); Lautrec, the Forbes five-star, AAA Five Diamond fine dining restaurant at Nemacolin Woodlands 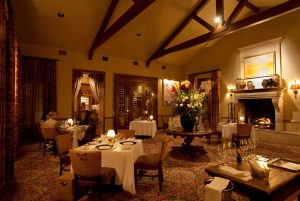 Jonathan Cartwright joined the team as General Manager/Chef.  Cartwright was the General Manager and Executive Chef at the acclaimed White Barn Inn in Maine. His talents garnered an invitation to cook at the James Beard House in New York City, an honor accorded only to the country’s greatest chefs. Under his stewardship, The White Barn Inn Restaurant received a Five Star rating from Forbes and AAA’s Five Diamond Award. Cartwright is one of only 20 Grand Chefs of Relais & Chateaux in the U.S.

A certified organic garden produces vegetables, fruits and herbs and a 7,000 bottle wine cellar has earned the Wine Spectator “Best of Award of Excellence”

THE SERVICE at Inn at Dos Brisas

With only 9 haciendas and casitas and a maximum of 18 guests, there is the opportunity to provide outstanding personal attention and Dos Brisas takes full advantage of the opportunity. The service is exceptional. In our case it was thanks to a young man named Christopher Roberts who could not have done more to make our visit enjoyable. He seemed to anticipate what we needed, even before we did.

Welcoming notes, evening quotations and weather on your pillow, chocolate covered strawberries and iced milk at turn down, candles lit on the patio at night and two sets of toiletries in the bathroom are just some of the many personal touches that illustrate that these folks get the customer service thing in a big way. You’ll never feel so pampered. THE RATES at Inn at Dos Brisas

WHAT OTHERS SAY About Inn at Dos Brisas

The “perfect” “romantic getaway” (about an hour from Houston), this ranch style Relais & Chateau inn is “one of the nicest resorts in Texas” say fans of the “read-your-mind service” and the “peaceful” Spanish-style casitas with remote controlled fireplaces, mini kitchens, satellite HDTVs, WIFI, baths with L’Occcitane toiletries and private patios overlooking meadows and ponds; each guest gets use of a golf cart to explore the 300 acres, which include a “phenomenal” restaurant with an “amazing wine list,” an infinity pool, 10 miles of groomed riding trails, skeet shooting and biking. ZAGAT

PROMOTIONS at Inn at Dos Brisas

Any time except the dead of summer.

DRIVING DISTANCE
Washington, Texas is located about an hour’s drive from Houston, two hours from Austin and three hours from Dallas.

On the property…
There is an Infinity pool overlooking the countryside, horseback riding ($100) on 10 miles of groomed trails, fly fishing in stocked ponds ($100), walking/running/biking on roads throughout the 300 acre property, skeet shooting ($100) with all equipment provided (this was fun and even though we had never shot before managed to hit five!), massage and spa services ($125) in the privacy of your casita and a remarkable personal tour of the property’s gardens where you will learn about organic gardening and the Inn’s culinary philosophy. This is not to be missed, it is fascinating. You can arrange a private tasting ($100) in the 8,000 bottle wine cellar and for the more sedentary guest there is a collection of DVD’s, board games and books.

Off property…
the charming little town of Brenham is about 11 miles away and features interesting historical and cultural attractions as well as antique stores and boutiques. You’ll find the George Bush Presidential Library and Museum, an antique carousel, the renowned Antique Rose Emporium and the Bluebell Creamery among other attractions.